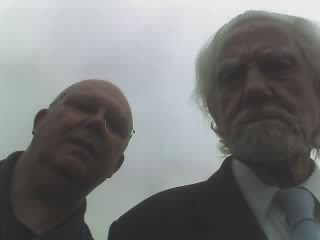 John Pegg and Kenneth Lawson exhibited together in a joint show at Wendy Levy Contemporary Art in 2012 and again in 2014/15 at Stockport Art Gallery.

Ken and I became close friends in spite of our contrasting backgrounds, personalities –  and  a variety of non-compatible interests. We had flats in the same development in West Didsbury and were on nodding terms for many years before a casual invitation into his home sometime in the early 90s led to the discovery that we both painted. We were immediate friends and remained enthusiastically so until his death some 15 years later.

He was pleased to find someone else in his immediate neighbourhood with an interest in and knowledge of 20th century British painting, and soon the conversation was fizzing along, usually in some Didsbury cafe or pub. He would produce a carefully organised selection of cuttings, postcards  etc., even the occasional gem of a 1940s exhibition catalogue for us to peruse and talk about, and which he’d generously pass on to me at the end of the session.

We’d talk ideas or technique, as well as generally rummaging through the lives of largely forgotten personalities of the 40s and 50s, many of whom Ken had met and about whom he had anecdotal glimpses to pass on.

He’d been part of London’s bohemia during the Second World War and known characters such as  Jack Bilbo of the Modern Art Gallery (who introduced him to the newly arrived refugee Kurt Schwitters), and painters from the art establishment like Claude Rogers. It was Jack Smith, the painter whose picture of a kitchen sink gave the movement it’s name, who took him to see Rogers. On the way he offered Ken surgical spirit – which was declined!

Ken was highly conspicuous – 6’ 4” was an enormous height in the 1940s – and  the pre-hippy long hair, shaggy coat and sandals soon attracted the attention of another pub regular, Dylan Thomas, who mockingly dubbed him ‘My Lord Jesus Christ’! My feeling that they didn’t get on was confirmed when, inevitably, I asked what Dylan Thomas was like and one of Ken’s haughty sniffs preceded a peremptory ‘Fat little Welsh boy!’. Mind you, next to Ken everyone looked short and fat!

We were too far apart stylistically to have much effect on each other’s painting, though I was pleased with the result when I used Ken’s abstract style as the inspiration for an Orkney seascape. I had no influence on Ken’s work other than an occasional opinion or piece of advice over details when he asked. But this could be useful as even Ken with his intuitive approach could sometimes overwork a painting.

We both attached a lot of importance to the role of intuition in the painting process, especially with regard to composition, though our methods of enabling it to operate (as usual!) differed. It’s the abstract substructure of relating elements in any strong painting in any style, which captivates the viewer’s subconscious.

This isn’t surprising when one of the earliest tasks we have when we are born is to decode the visual patterns we are confronted with. This is surely what Clive Bell meant by his (much criticised) term ‘Significant Form’ all those years ago. But be that as it may, an over self-conscious approach to this substructure is liable to produce a contrived composition and my means of ensuring that a proportion of the elements arrive of their own accord – i.e. via the eye rather than the intellect, is to paint ‘by the seat of my pants’ – and then walk away. This enables the conscious mind to catch up with what’s going on before it accidentally destroys essential elements with the wrong kind of ‘logic’.

I’m sure that very many painters operate in this way, though it’s been said of even as well known an artist as Augustus John that he ‘buried a lot of good paintings under bad ones’ – and this in spite of his own comment; ‘Unhappy he who continues to flog the horse whose spirit has already been released!’ (Horizon Vol. V, No.26). Ken, especially in his spontaneous gestural abstracts of the 1970s, allowed intuition full reign, and even in his figurative work would quite often observe and then paint from memory in order to prevent his sight from interfering with his vision and allow these formal elements to coalesce.

Quite early in our friendship, when I gave him a book on Richard Diebenkorn for his birthday, I was rather taken aback by the length and effusiveness of his thanks. I got the feeling that he hadn’t known many male kindred spirits in his life. Once over lunch and probably in an expansive mood, he told his wife that I was the best friend he’d ever had. Well, I doubt that – Ken had a long and colourful life and friends going way back with whom he’d kept in touch, but I was pleased to be so highly thought of.

In the mid 90s I moved to Altrincham, but this did nothing to dilute our friendship – and the increased wall-space gave my wife Anne and me the opportunity to buy several of his larger paintings. He was an indefatigable letter writer and I received a steady stream of correspondence – I have a tin-trunk full – resulting both from my no longer being in Didsbury and the habit he developed about this time of wintering abroad. During the summer, however, we still had plenty of opportunities to meet up.

One day we bounced into Manchester on the top deck of a bus (front seats of course!) in order to ‘do the rounds’ which included a visit to Jan Green at Tib Lane. Ken was on top form and I didn’t want to break his mood when, on the way home, I suddenly realised I was rapidly coming down with a  particularly nasty virus. I therefore kept my distance in the hope that he hadn’t caught it and said nothing for the short time we had before we parted. For the next few days I was out of commission  but once I’d ‘resurfaced‘ I phoned, and after several failed attempts to raise him, Anne drove me to Didsbury. There was no answer when I buzzed the intercom, but a neighbour let me into the building and I managed to rouse him sufficiently  to open his door. He was so ill we immediately phoned for an ambulance and he spent a week or ten days in Withington Hospital. Later he declared that I’d saved his life – but that’s hardly the way I see it.

When he was a teenager and in constant poor health Ken had been befriended by Teddy Joyce and his dance band who, though now completely forgotten, were very big stars at that  time – the mid to late thirties. Even at a distance of 70 years, he was quite moved as he told me of their kindness and was very careful to emphasise that there had been no improper hidden agendas. (This wasn’t always true of the war-time galleries!!). I think that his own generosity was inspired in part by a desire to give back to the World some of the kindness Teddy and the boys had shown him – in fact he said as much.

When we first became friends I’d never exhibited – so he took my work to two galleries both of which took me on. I write at Ken’s old drawing desk, use his painting stool and often an easel of his (all rescued from his rented garage) – and I still occasionally use one of his old primed boards to paint on.

He helped in other ways too, such as when Anne and I thought we’d start a little business and used his wonderful designer’s handwriting to create the logo. We had a very low-key civil wedding and Ken was my only representative. Once, when I turned up at his flat with sore feet, he even provided a pair of shoes (I still wear them!). In other words he would very often treat me like a son.

But all powerful personalities have their non-saintly side too, and when the mood took him, he certainly wasn’t averse to testing systematically a person’s psychological armour. I think that one reason we were friends was because I had the inner confidence to parry these thrusts!

A strong artistic ego kept original work by anyone else off his walls. There were some reproductions of work by De Stael and particularly by Modigliani but, for instance, an original stage design abandoned by John Piper on a set  where they were both working, lay neglected in the  garage for many years before Ken got round to sending it to auction.

Like many artists he tended to talk mostly about his own work, but I do remember that, on the last occasion he was well enough to sit and have a coffee in a Didsbury cafe with me, he commented: “Nobody paints the way you do…” before following up this feasibly back-handed compliment with “…art college would have ruined you!”.

It took Ken a long time to get round to clearing out that garage as its clutter contained so many memories and though generally not squeamish – either mentally or physically for that matter – he admitted to feeling more than a little apprehensive about trawling through its by then damp and damaged contents. I remember the looks of doubt and disbelief as I advised (successfully) against any wholesale destruction.

He wintered firstly in Tavira in Portugal for a few years before eventually settling on Menton which had the advantage of being familiar territory from his association with Graham Sutherland, whose assistant he’d been. By that time I had family commitments and it took until the winter of 2006/7 to respond to his invitations to visit. I’m so glad I did. We had a wonderful few days in unseasonably warm weather in Menton’ s relaxed and civilised atmosphere, without ever suspecting that this had been my last chance to visit him there. By the following autumn he was beginning to suffer from the effects of his final illness and became too ill ever to return.

I’m now on the 55th volume  (i.e. notebook!) of a mental scrapyard I started in 1985. Perhaps it serves the same function as Ken’s garage in that I’ve never returned to their contents and would feel the same apprehension if I did. Their original function was always merely to act as a dumping ground for my thoughts and personal history, but it’s important to me now to know that one day, if the urge takes me, I’ll be able to return to my conversations with Ken and sift through a mass of anecdotal detail which would otherwise have been lost.

“I find that there is plenty of room in the world for everybody – great interspatial depths, great ego universes, great islands of repair, for whomever attains to individuality. On the surface, where the historical battles rage, where everything is interpreted in terms of money and power, there may be crowding, but life only begins when one drops below the surface, when one gives up the struggle, sinks and disappears from sight.”  H. M. 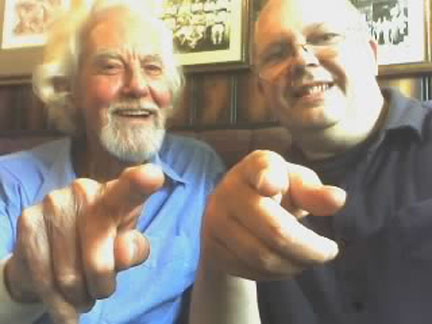